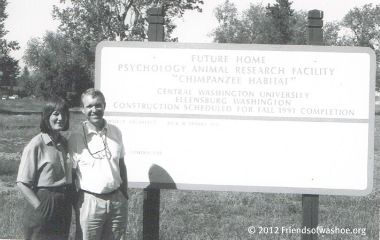 On May 7, 1993, Washoe woke up, looked around, and rubbed her eyes. She was not in the room where she'd gone to sleep the night before. And when she looked out the glass door, she could see that she was no longer on the third floor of the psychology building. Instead, she was facing out on a vast grassy area-more than five thousand square feet in size-that had giant climbing poles and structures, earthen terraces, and hanging fire hoses, all enclosed in a wire-fence dome that vaulted thirty-two feet above the ground. Sunshine was pouring through the dome, flooding the grass below.

Washoe was in her new home. After fifteen years of planning, including ten years of fund-raising, eight years of designing, and two years of building, our dream of a Chimpanzee and Human Communication Institute had finally come true. At 2 A.M. that morning we had tranquilized the chimps and given them physical exams. Then we bundled them in blankets and took them one by one, in a van, from the psychology building to the new institute. It was all of four hundred yards, but on the last trip, while ferrying Moja, we ran out of gas. No one had thought to buy any. We wound up carrying Moja, who was by now awake and sitting up, on a makeshift sedan chair across the campus. She looked like the Queen of Sheba and loved every minute of it.

The few weeks leading up to the big move had been difficult. Washoe, in particular, had grown reserved and withdrawn when she saw us packing boxes, putting toys away, and disrupting her family's routine. She may have been remembering the terrible upheavals when she left Reno at age five and Oklahoma at age fifteen. Perhaps she was wondering who of her family and friends was going to be left behind this time.

To ease the chimps into their new home, some of our volunteers produced a videotape preview, with Debbi and me showing them the new sleeping quarters, kitchen, indoor exercise areas, and outdoor play area. Two days before the move, Washoe, Loulis, Moja, Dar, and Tatu gathered around a television set to watch the videotape. LOOK! one of the volunteers signed to them. THERE'S ROGER IN YOUR NEW HOME! ROGER SHOWS YOU BED. HE GOES IN DOOR-BIG PLAYROOM. LOOK! DOOR THERE-YOU CAN GO OUT! SEE GRASS. YOU CAN RUN, CLIMB, PLAY. YOU WILL LOVE NEW HOUSE! WE ALL GO WITH YOU!

The chimps were entranced and they visibly relaxed at the sight of familiar faces in the new house. When the tape was finished, they asked to see it again.

Now, two mornings later, I was standing near Washoe in her new house as she gradually woke up from a drugged sleep. She stared at the sunlit field just outside her door. In an instant she seemed to realize that she was in the HOME on the videotape, and she started screaming with delight, just like on Christmas morning. She leapt up, turned to Loulis, and hugged him. Then she staggered toward the glass doors, looked right at me with a glint in her eye, and signed OUT OUT!

Our plan was to keep the chimps inside for two weeks, but they spent the first two days begging to go out. So on the third day, after breakfast, I told them, TODAY YOU GO OUT. Washoe leapt up and parked herself by the hydraulic door that leads to the outside upper deck. She waited there for more than an hour, with Loulis right behind her. He seemed a little nervous and needed his mother's reassurance.

Finally, the door slid up. Loulis swaggered, then seemed to think better of it and sat back down. Washoe waited for him patiently, but Dar squeezed by and exploded out the door and down the stairs to the ground. He raced across the grass field with such an ecstatic movement that he looked like he was skipping, quadrupedally. He headed directly for the far terrace, climbed to the top of the thirty-two-foot-high fence, and gazed out over Ellensburg. Then he turned toward us and let out a loud pant-hoot of happiness.

Washoe was the next one out. She stood upright and surveyed the terraces, the garden, and the familiar human faces at the observation window below. Stretching out her leg, she touched her toes to the first step and pulled them back quickly. Then she noticed Debbi standing at the fence near her. She walked over, reached through the fence, and kissed Debbi through the wire. This was clearly her way of saying "thank you."

Now Loulis edged out of the doorway. Washoe climbed down a few steps to encourage him, then looked back and signed HUG to Loulis. He was clinging to the fence. Tired of waiting, Washoe climbed the rest of the steps to the ground. Standing upright, she stamped her feet and thumped the back of her hand against the observation window to display her territoriality. Then she plastered her lips to the glass and delivered kisses to a few friends, including Dr. Fred Newschwander, her veterinarian.

Dar climbed down the fence, ran across the field, and embraced Washoe. She ambled leisurely across the grass, climbed a pole, and perched at the top, watching Moja, who was now coming out of the doorway. Moja's movements were stiff and slow, but she managed to make her way down the steps and up the terrace. Then, to my amazement, she grasped the fence and climbed to its highest point. From there she began strolling around the ledge of the garden, high above the ground.

Tatu crept onto the deck. She just gazed out at all the excitement for a while. Finally, she moved her crippled body slowly down the steps. At the bottom she settled into a nice spot in the garden where she spent the whole afternoon examining blades of grass and tasting various weeds.

Loulis was still stranded up on the deck, so Washoe climbed down from her perch and joined him. He crept back inside the door and nodded to Washoe, as if he was trying to convince her that it was time to go back inside. She reached in and pulled him out. Now Dar climbed up on the deck, apparently trying to get Loulis down. Dar sat next to his friend, staring up at the sky with the biggest chimpanzee smile I've ever seen. Loulis seemed buoyed by having Dar nearby, and, at long last, he walked cautiously down the steps. At the bottom his feet touched the earth for the first time since he was a baby.

Dar pant-hooted loudly, took a running leap off the deck, and jumped eight feet to the ground below. He landed in a tuck, rolled onto a tire, and jumped up to hug Washoe, who then hugged Loulis. To our utter amazement, Loulis then went over to the fence and climbed to the very top. He had never in his life been more than seven feet off the ground. Now he looked down at the grass, thirty feet below, and screamed in absolute terror. Washoe raced up the fence to rescue him.

When Loulis made it down he went over to Dar, who was up on the deck basking in the sunlight. Dar put his arm around his little brother's shoulder and held him close. "This is the life, little buddy," he seemed to be saying. "This is the life."