Moja was the second eldest chimpanzee at CHCI. Her name sign is the fingertips of an "M" hand drawn across the opposite palm. Moja was born on November 18, 1972 at LEMSIP (Laboratory for Experimental Medicine and Surgery in Primates) in Tuxedo, New York. Moja died on June 6, 2002, at the Chimpanzee and Human Communication Institute.

Moja was the chimpanzee at CHCI who was most likely to dress herself in clothes and frequently used mirrors to groom or just to gaze at herself. 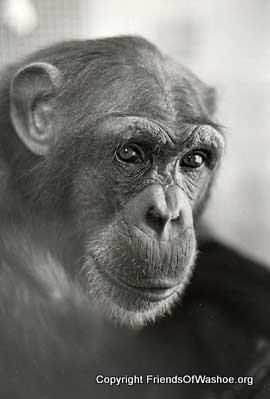 Full name: Moja Lemsip. Moja is the Swahili word for "one," as she was the first chimpanzee in Gardners' second project. LEMSIP is the name of the lab where Moja was born.

Place of Birth: the Laboratory for Experimental Medicine and Surgery in Primates (LEMSIP) in Tuxedo, New York.

Early Childhood/Rearing Conditions: Moja was cross-fostered by Drs. Beatrix T. and R. Allen Gardner until she joined Washoe, Loulis, and the Foutses at the University of Oklahoma in 1979.

Personal: Moja was a dramatic and engaging individual with a stylish flair. Moja also spent a lot of time interacting with her human caregivers and often played games of peekaboo. She frequently played games of tag or chase with Tatu.

Favorite activities: You could often find Moja looking at herself in mirrors, brushing her hair, and dressed up in clothes, particularly if the clothes were red, her favorite color. When outside she we would often see her climbing, swinging, and running. She loved to played with Velcro and would point it out on caregivers' clothes.

Tributes to Moja after her passing