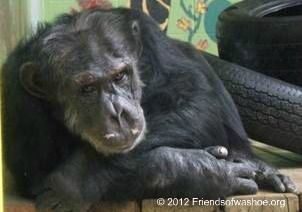 Loulis is the youngest of the family and Washoe's adopted son. Loulis's name sign is formed with the thumb of an "L" hand placed on the tip of nose. Loulis was named for two of his caregivers, Louise and Lisa, at Yerkes Regional Primate Research Center in Atlanta, Georgia where he was born on May 10, 1978. He and Tatu moved from CHCI in Ellensburg, Washington to Fauna Foundation in Quebec, Canada in August 2013.

Unlike the other chimpanzees at CHCI, Loulis was not cross-fostered. As Washoe's adopted son, he acquired his signs from Washoe and the other signing chimpanzees. He was the first non-human to learn a human language from other non-humans. Loulis observed the other chimpanzees using the signs of ASL around him, like CHASE and TICKLE during play interactions. Washoe would mold his hand into signs like MORE for more food, teaching him to sign as she was taught. 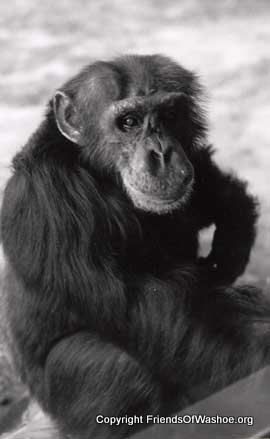 Full Name: Loulis Yerkes. Loulis was named for Louise and Lisa, two laboratory workers at the Yerkes Regional Primate Research Center where he was born.

Name Sign: "L" placed on the end of nose, without movement. He received his name sign from Washoe; it is an adaptation of the sign BUG.

Early Childhood/Rearing Conditions: When he was 10 months old, Loulis moved from Yerkes to Oklahoma where Washoe adopted him. He learned his first 55 signs from Washoe and the other signing chimpanzees. For the first five years, humans were allowed to sign only seven signs around of Loulis (WHO, WHICH, WANT, WHERE, NAME, THAT, and SIGN). He was the first non-human to learn a language from another non-human.

Personal: Ever the charmer, Loulis has a quicksilver temperament -- ranging from sweet to devilish. Always the baby of the family, Loulis had a very special relationship with his mother Washoe and a particularly close friendship with Dar. Loulis is playful, affectionate and quick to offer reassurance. Loulis is the chimpanzee most likely to be enriched by watching human visitors and is very interested in children. He is very social with both his chimpanzee and human family and has continued to show his gregarious personality at Fauna Foundation.

Favorite Foods: Granola bars, plain or fruit-flavored rice, red apples, and Koolaid flavored ice are foods that elicit excited food squeaks in Loulis. However, he is also the most suspicious of new foods.