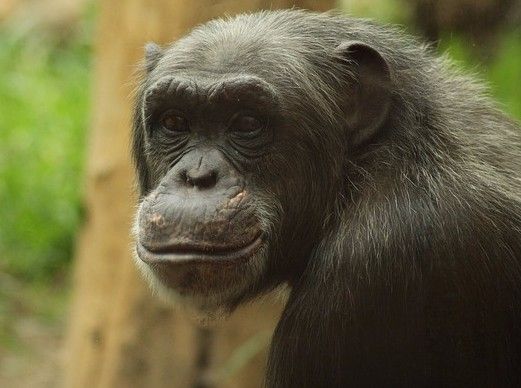 Physically and genetically, chimpanzees are closely related to humans and share 98.77% of our genetic makeup.

Chimpanzees live in equatorial Africa. Chimpanzees are found in dense forest and more open wooded savannas from Sierra Leone and Guinea on the Atlantic Ocean to the lakes on Tanganyika and Victoria in eastern central Africa.

Free-living chimpanzees are listed as an endangered species by the World Conservation Union (also know as IUCN).

There are three subspecies to the species Pan troglodytes:

A male chimpanzee can weigh between 135 and 150 lbs. and stand approximately four to five feet tall. Females are usually somewhat smaller in size.

Chimpanzees have long arms. When extended, their arms have a span half as long as their body's height.

The chimpanzee is omnivorous, eating a about 200 kinds of fruit; termites, ants, honey and bird's eggs; and birds and small mammals.

Offspring sometimes maintain a bond with the mother throughout life.

Chimpanzees form organized communities of 2 to 80 individuals on fairly large home ranges, where the chimpanzees remain for years. Within a community, sometimes a female migrates to another community. Males, however, rarely migrate.

Members of a community cooperate in hunting and sharing food. On finding a food source, they hoot, scream and slap logs to attract others.

Chimpanzees are very social and use many different ways to communicate with other members of their group, such as facial expressions, vocalizations, body language, grooming, and kisses and pats.

Chimpanzees are more gregarious and noisy than other apes, and they frequently engage in rhythmic stamping, hand-clapping and beating or kicking a hollow tree. Their chorus of hoots and hollers carries farther than a mile.

Chimpanzees are well known for knuckle walking, which is their main method of travel.

Chimpanzees manufacture and use tools. For example, twigs and vines are used to extract termites from nests. A twig is stripped of leaves, thrust into a termite hole where the termites latch on to it, and removed. Chimpanzees also use sticks to enlarge holes to facilitate the recovery of ants. Many use leaves to clean their bodies, and some populations chew on leaves to make them more absorbent so that they can be used to dip for water in holes in trees.

Every night chimpanzees construct nests of vegetation, nine to twelve meters high in a tree, in which to sleep.

Scientists estimate that there are between 80,000 and 130,000 chimpanzees left in the entire world. These populations have been reduced and fragmented by human interference in their habitats. Conservation efforts that prohibit the hunting and sale of chimpanzees provide some protection; however, these bans are difficult to enforce.