May, 1981: Tatu and Dar Move from the University of Nevada to Central Washington University, in Ellensburg, Washington 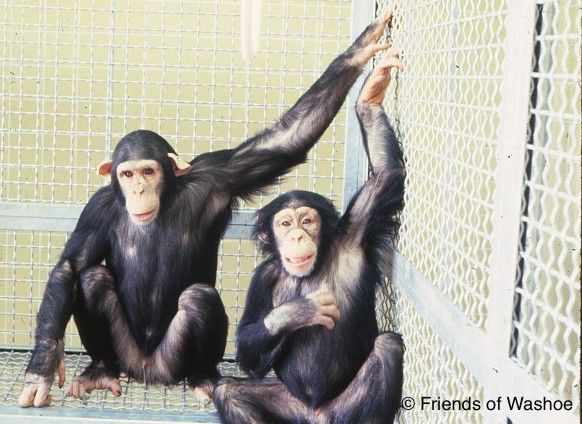 …In February 1981, just one month after Washoe’s family settled into its new home, I received another life-changing phone call from Allen Gardner. He and Trixie wanted to send us Moja's two foster siblings, Dar and Tatu.

The "problem child" this time was four-year-old Dar. The Gardners had acquired Dar when he was an infant from Holloman Air Force Base in 1976 and named him for Dar es Salaam, the capital of Tanzania. There was nothing wrong with Dar. He was just entering those “fearsome fours” when chimpanzee boys, like most human boys, begin showing their assertiveness and testing their physical power. Dar's was somewhat more intimidating because he was already a lanky 60 pounds and growing fast. His chimpanzee father, Paleface, was the largest chimp ever held at Holloman Air Force Base. Paleface was five feet four inches tall and weighed 235 pounds. Dar's mother, Kitty, gave birth to a series of immense chimpanzee infants, including one who was fondly known as The Hulk. Dar also inherited his father's distinctive white skin and his mother’s huge floppy ears.

The Gardners had never dealt with a male chimpanzee past infancy, and they didn’t know what to do with Dar. He was becoming known around his Reno neighborhood as The Ayatollah. Dar would often escape from his student companions and park himself by the side of the road, a picture of innocence, with his freckled face, enormous ears, sweet expression, and child’s T-shirt. As joggers came by, Dar extended his hand and beckoned them over. When the person shook hands, Dar wouldn’t let go. When the Gardners' student arrived, Dar opened his mouth and threatened to bite his prisoner, as if to say, "Don't make me hurt him!" One time this hostage drama dragged on for hours.

Dar also took great pleasure in his newfound powers of demolition. One day some graduate students were driving the chimpanzees to get hamburgers. Dar was so excited he began thumping the windshield until it popped right out of the frame. The windows at home were not faring any better. Dar regularly escaped his cabin at the crack of dawn and got into the Gardners' house by breaking a window. He would then crawl into bed with Allen and Trixie. The Gardners had decided not to find out what havoc Dar would wreck when he turned six or seven.

Five-year-old Tatu, on the other hand, was the family’s precious angel, the good girl. The Gardners acquired her from William Lemmon at the Institute for Primate Studies, in 1975, and named her for the Swahili word meaning "three." (Between Moja and Tatu, the Gardners had acquired a "number two" chimpanzee named Pili, but he died of leukemia in 1975.) There was no need for padlocks and keys around Tatu. Unlike Washoe, she never ransacked the cupboards and raided the fridge. Lubriderm oil could be left out in clear sight and Tatu would never empty it. Her room was neat and tidy with the toys lined up in a perfect row. After she played with one toy she would put it back in its place before playing with another. The Gardners often said Tatu was the kind of no-fuss chimpanzee they could live with forever.

But Dar and Tatu had grown up together, and the Gardners didn’t want to separate them. With their federal funding running out, Allen and Trixie wanted to relocate Dar and Tatu right away. Allen always said that a scientist should never do research without funding. I tried telling Allen on the phone that Debbi and I had our own money problems. Our three-year NSF grant was almost used up, and it hadn’t been renewed yet. If we lost our funding, we would have trouble just feeding and caring for Washoe, Loulis, and Moja.

…Debbi was standing next to me and she could tell exactly what Allen was proposing. When I got off the phone, I looked at her and she looked at me. Take on Dar and Tatu? I had met them only once, in 1977, when they were infants. We would have to comfort them through the separation from their home and parents and slowly integrate them into Washoe’s family. We would have to steer them through childhood and adolescence, which was already a full-time job with Loulis- not to mention with our own three children. But unlike our kids, Dar and Tatu would be completely dependent on us for the rest of their lives, and that could be another forty or fifty years (if we lived that long). When we took on Moja we at least had some grant money, but now we were just getting by.

But still we couldn’t say no. Dar and Tatu were babies. Neither of us could live with the possibility that they might wind up in the kind of place we had rescued Loulis from. Our fear was heightened by the anguish we’d felt at leaving Ally, Booee, and the others behind in Oklahoma. We had been legally helpless to take them or protect them, and it was only a matter of time before Lemmon sold them. We knew that once Dar and Tatu left the Gardners’, they would also be beyond our reach.

I called Allen back and told him we would take Dar and Tatu.

… We kept Dar and Tatu apart from Washoe, Loulis, and Moja for the next six months. There were just too many strong personalities involved and no way of predicting the family dynamics. Even though they were separated, the two families could see and touch each other through a gated tunnel that connected their rooms. They spent a lot of time in the tunnel sizing one another up. Dar and Loulis frequently kissed through the gate and it was obvious they would be friends. Tatu seemed happy to see her foster sister, Moja, after two years apart, but Dar was still terrified of Moja. He may have remembered that his older sister had a habit of biting. Washoe stayed close behind Loulis, occasionally displaying to let the newcomers know who was boss.

In December we opened the tunnel gate and there was instant pandemonium- a lot of running around and screaming on all sides. With a mixture of excitement and fear, Dar and Tatu crept slowly into Washoe’s room. Their own room had no windows, so Tatu sat down and stared out Washoe’s windows at the snow. Then she pointed to the asphalt parking lot and signed BLACK.

With a play face, Loulis signed HURRY COME to Dar, who signed the same thing back. The two boys began tickling, laughing and chasing around the room. At one point, Dar was dragging Loulis by the leg, and Washoe grabbed her son back. Dar was swaggering, and he was clearly too macho for Washoe’s taste. Even though Dar weighed eighty pounds he was no match for Washoe. After reprimanding him a few times, she held out her arm and Dar kissed it in submission. A little while later he turned his back to her and she patted him and tickled his neck.

Every so often Loulis ran back to Moja and touched her repeatedly, as if to let her know that everything was OK. Tatu stayed back in the tunnel, probably scared of Washoe. When Loulis and Dar rolled by she grabbed at Loulis somewhat aggressively. After Debbi told Tatu that Loulis was a BABY, her touching became much gentler. An hour later, Dar and Tatu were playing with Loulis on the bench when Washoe rushed into the room, startling all three of them. Loulis signed HURRY HUG to Tatu and she gave him a big hug. When we closed the tunnel gate before dinner, separating the two families again, Loulis began crying. He didn’t want the day to end.