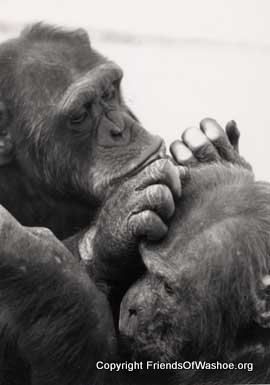 After three days, Washoe stopped asking me about Sequoyah. It seemed that she had at last accepted that he was gone. But that seemed to plunge her into even deeper anguish. She was no longer eating, and Debbi and I were panicked. We had never seen Washoe depressed, not even after the traumatic move to Oklahoma in 1970. Washoe was simply not a depressive type. She was a survivor. Seeing her so withdrawn was like seeing our most well-adjusted friend suddenly drop off into total darkness. But worse, we felt completely helpless to stop it. Washoe was telling us that she wanted her BABY, but there was nothing we could do to ease her pain.

I had already seen too many chimpanzees mourn themselves to death. If I didn't do something soon I knew that Washoe would perish from starvation and heartbreak. Letting her die was unthinkable. She was a member of our family.

There was only one hope left. Washoe had clung to Abendigo, her "foster child," just after Sequoyah's birth. Perhaps a new infant might rekindle her strong maternal instinct-and with it, a new will to live. Somehow, somewhere, I would have to find a baby for Washoe to adopt.

I spent the next several days contacting primate facilities around the country, desperately trying to locate a chimpanzee infant to replace Sequoyah. After phone calls to dozens of places, the Yerkes Regional Primate Research Center, in Atlanta, Georgia, agreed to give us a ten-month-old male named Loulis. He was named for the two lab techs who cared for him: Louisa and Lisa. Loulis was already weaned, which was somewhat surprising because chimps normally nurse for at least four years. I assumed that they had separated him prematurely from his mother. His unusual eating habits made Loulis the perfect candidate for Washoe because we wouldn't have to reestablish a nursing bond...

We arrived at Yerkes early on March 22, 1979, after driving twenty hours straight...After meeting the director, Frederick King, we were taken to the chimpanzee nursery, where Loulis had spent his first few months. The NURSERY sign on the door made me think of a warm and friendly playroom for babies, the kind of environment Washoe enjoyed in the Gardners' backyard. But words had a more Orwellian meaning at Yerkes. The "nursery" was a barren room with two stainless steel cages on rollers. Seven baby chimpanzees were drinking bottles of milk, and my guide told me that researchers were using the milk in an attempt to infect the babies with live leukemia virus. I had to turn away.

We were then led down a long corridor that looked like a lockup for hardened criminals. We passed cage after cage of the same size and shape, all enclosed by giant steel bars, and all of them impregnable. Sitting or standing in each cell, the size of a small kitchen, were one or two chimpanzees. Some of them had a faraway vacant stare that reminded me of Washoe's recent depression. Others charged the steel doors and issued threatening pant-hoots, as though they wanted to kill us for what was being done to them. It was heartrending enough to see so many smart, sentient, emotional beings cut off from natural social contact. But to make matters worse, their cages were absolutely empty-not a toy, not a twig, not a blanket. I wondered what Robert Yerkes would have thought of this scene. Nearly a half century earlier he had summed up the chimpanzee's highly social nature when he said, "One chimpanzee is no chimpanzee."

We arrived home on March 24th before sunrise... and at 8 A.M., we were ready to introduce Loulis to Washoe.

We drove Loulis over to the pig barn, where he, Washoe, and Ally would be living until their new home at the air base was ready. I went inside alone to tell Washoe the news.

I HAVE BABY FOR YOU, I signed happily.

For the first time in two weeks, Washoe snapped out of her trance and became excited. BABY, MY BABY, BABY, BABY! she kept signing as she hooted for joy and swaggered on two legs. Her hair was standing on end.

I went out to the car and a minute later came back in carrying Loulis in my arms. But as soon as I went into Washoe's cage, she got one good look at Loulis and her excitement was gone. BABY, she signed calmly as she studied Loulis with mild interest. I had forgotten to make it clear to Washoe that it was A BABY, not YOUR BABY. Too late. I would have to hope for the best.

I thought that Washoe would want to hold Loulis, but instead she sat three feet away, watching him. I also expected Loulis to want Washoe to hold him, but instead he clung even tighter to me. I had to pry Loulis off me, turn him around, and hand him over to Washoe. The minute Washoe took him, I quickly left the cage and closed the door. Loulis struggled out of Washoe's arms and tried to race after me.

Washoe was already smitten with Loulis, though she knew better than to force herself on him. She went over to Loulis and touched him gently. Then she moved away, hoping to start a game of tickle and chase. But Loulis wasn't going for it. He sat alone on the floor, looking out at Debbi and me. So Washoe tried a new tactic: she got as close to Loulis as she could without making him run away, and there she sat, watching him, totally fascinated. That night, Washoe tried to get Loulis to sleep in her arms, as Sequoyah had done. But Washoe was obviously not his mother, and Loulis slept alone on the end of the metal bench.

At 4 A.M. the next morning, my students reported a dramatic turning point. Washoe woke up, stood up on two feet, and vigorously signed to Loulis with a loud slapping sound: COME BABY. Loulis was jolted awake and he jumped straight into Washoe's arms. Engulfed in this large and hairy pillow, Loulis fell back asleep.