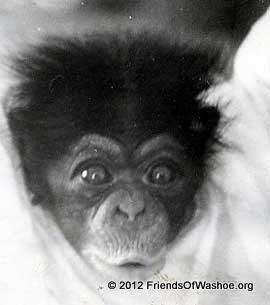 We had to replicate the procedure and results of Project Washoe with several other subjects. At the same time, the chimpanzees of the second project could interact with each other and this, in itself, added a new dimension to the cross-fostering. In a human household, children help in the care of their younger siblings who, in their turn, learn a great deal from older siblings. Sibling relationships are also a common feature of the family life of [free-living] chimpanzees (Goodall, 1986). At Gombe, older offspring stay with their mothers while their younger siblings are growing up and they share in the care of their little brothers and sisters. Close bonds are established among the older and younger members of the same family who remain allies for life. Equally significant, from our point of view, are the ways in which the younger siblings follow and imitate their big sisters and big brothers. Seven-year-old Flint followed and imitated his young adult brother, Faben, in a way that would certainly be described as hero worship if they had been human brothers. Faben was partially paralyzed as an after effect of polio and had a peculiar and striking way of supporting his lame arm with one foot while he scratched the lame arm with the good arm. During our 1971 visit to Gombe, we ourselves observed how Flint copied even this peculiar scratching posture of his brother Faben.

In order to capitalize on the relationships between older and younger foster siblings, we started them newborn, but at intervals, so that there would be age differences. Starting the subjects at intervals in this way also had the practical advantage of allowing us to add human participants to the project more gradually. In each family group there was always a core of experienced human participants for the new recruits to consult as well as a stock of records and films to study. This helped us achieve the necessary stability and continuity in the foster families. Fifteen years after the start of Project Washoe, there were still five human participants who had been long-term members of Washoe's original foster family.

The second project became a fairly extensive enterprise by the time there were three chimpanzee subjects. At that point, we moved from the original suburban home to a secluded site that used to be a guest ranch. The chimpanzees lived in the cabins that formerly housed ranch hands. Many of the human family members lived in the guest apartments and the rancher's quarters. The humans' bedrooms were wired to intercoms in the chimpanzees' cabins so that each of the cross-fosterlings could be monitored by at least one human adult throughout each night. There were great old trees and pastures, corrals and barns to play in. There were also special rooms for observation and testing as well as office and shop facilities. The place was designed to keep the subjects under cross-fostering conditions until they were nearly grown up, perhaps long enough for them to begin to care for their own offspring.

At all times in the second project, there were several human members of the family who were deaf, themselves, or who were the offspring of deaf parents, and still others who had learned ASL and used it extensively with members of the deaf community. With the deaf participants it was sign-language-only all of the time, whether or not there were chimpanzees present. The native signers were the best models of ASL, for the human participants who were learning ASL as a second language as well as for the chimpanzees who were learning it as a first language. The native signers were also better observers because it was easier for them to recognize babyish forms of ASL. Along with their own fluency, they had a background of experience with human infants who were learning their first signs of ASL.

After Project Washoe, prospective human participants usually began corresponding with us well before they joined the project. In this way they could begin to prepare themselves months and years before they arrived in Reno. They arrived with a serviceable command of ASL, as well as training in experimental psychology, primatology and related fields. Many had made friends in their local deaf community and had even acquired firsthand experience with deaf children. News of the success of Project Washoe had been warmly received in the deaf community. There were enthusiastic articles in The Deaf American, the most widely circulated publication in the deaf community at that time (e.g., Swain, 1968, 1970). When we lectured at Gallaudet College (the national college of the deaf in Washington, D.C.) in 1970, we were told that our audience was the largest that had ever turned out for a lecture in the history of the college up to that time. Valuable channels of communication had been opened for us for consultation, advice, and recruitment.

The procedures that we used to teach signs were modeled after the procedures commonly used in human homes with [deaf] human children. Most of all, we signed to each other and to the cross-fosterlings throughout the day the way human parents model speech and sign for [deaf] human children. We used a very simple and repetitious register of ASL. We made frequent comments on common objects and events in short, simple redundant sentences. We amplified and expanded on their fragmentary utterances (e.g., Tatu: BLACK] Naomi: THAT BLACK COW/). We asked known-answer questions (e.g., WHAT THAT? WHAT YOUR NAME? WHAT I DO?). We attempted to comply with requests and praised correct, well-formed utterances. All of these devices are common in human households (de Villiers & de Villiers, 1978; Moerk, 1983; Snow, 1972). Parents throughout the world seem to speak to their children as if they had very similar notions of the best way to teach languages such as English or Japanese to a young primate (Snow & Ferguson, 1977).

Food and sweets can be powerful distracters. We soon learned that one of the worst times to teach anything was at the beginning of mealtime. The hungrier the chimpanzee and the more attractive the food, the more the teaching session would dissolve into a frenzy of begging (cf. R. Gardner & Gardner, 1988).

Operant conditioning was impractical as a method of teaching signs. Once a sign had been introduced into the vocabulary by whatever method, it was equally impractical to attempt to reward all appropriate usage by prompt and consistent delivery of appropriate goods and services. Even in those few cases where prompt and consistent rewards might be practical, all that we could hope to teach in this way would be a set of requests. Meanwhile, all connected discourse or conversation would certainly be disrupted by such a procedure. For the objectives of cross-fostering, the only practical way to proceed was to treat Washoe, Moja, Pili, Tatu, and Dar as if they had an intrinsic motive to communicate with us, the way human parents treat [deaf] human children.

Obviously as their verbal skills improved, the cross-fostered chimpanzees were more successful in making their wishes known, and, presumably, more successful in getting what they wanted. But, the same can be said for human children-or human adults for that matter. We also showed our approval or disapproval of signing by smiling or frowning, by nodding or shaking our heads, and by praising or scolding the youngsters in ASL, just as human adults normally respond to the verbal behavior of [deaf] human children.