October, 1970 - Washoe & the Fouts family move to the University of Oklahoma in Norman, Oklahoma 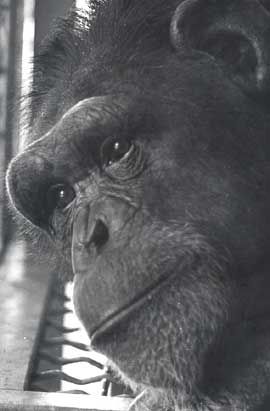 In the Spring of 1970, it began to dawn on me that my days with Washoe were nearing their inevitable end. I was still struggling with my Ph.D. dissertation, which would go through many rewrites, and I would soon schedule my oral defense. Before I met Washoe I had thought my dissertation would be about human children. Now here I was arguing the finer points of how chimpanzees learn sign language. Ironically, Washoe had taught me more about human children, especially their intense desire to learn and communicate, than I would have gotten from any academic study of child development. I felt well prepared to go to work with "learning disabled" kids. As soon as I finished my dissertation I would begin applying for jobs. My family was now counting on me to earn a living wage. Debbi was pregnant with our second child and we were tired of living on a research assistant's pittance.

I was going to miss Washoe. Through all our games in the trailer, all our sibling spats, and all our riotous escapades, she had won my heart. I would miss her antics in the willow tree, her enthusiasm for favorite books, her concern for my cuts and scrapes, and the way she signed WASHOE SMART GIRL. But most of all, I was sorry I wouldn't see her grow up. Like a big brother leaving home for college, I was going to miss out on a big piece of my kid sister's childhood. When I saw her next she would be a different person. It was a bittersweet thought.

Washoe was barely five years old. Her baby teeth were just starting to fall out. It would be another seven or eight years before she hit adolescence and sexual maturity. In the meantime she would keep growing physically and mentally. Human children don't stop learning and developing at five years, and there was no reason to think Washoe would either. She certainly showed no sign of reaching any limit in her ability to learn language. She kept picking up new signs, creating new sentences, and using them with increasing frequency. To determine the full extent of her language capacity, the Gardners would need to study Washoe until she was at least a teenager, and that's exactly what they planned to do.

Nobody was more surprised than I was when, one day in May 1970, Allen Gardner called me into his house as I was finishing a shift with Washoe and dropped the bombshell that would shape the rest of my life. "Roger, we've decided to send Washoe to the University of Oklahoma. We want you to go with her." I was dumbstruck. Project Washoe ended? My family and I moving away with Washoe? I couldn't begin to imagine what it meant, or even why it was happening. Apparently, the Gardners had decided months earlier to conclude the research and had been quietly scouting the nation's universities to find a new home for Washoe.

Mind you, Allen Gardner never asked me, "Roger, will you go?" He didn't suggest that I visit Oklahoma or meet William Lemmon. It was clear that Washoe's needs came first, and that I was going with her; she wasn't going with me. Gardner had negotiated the deal, given the order, and, like a good soldier, I obeyed. I didn't dare question my major professor even when he was planning my life. Allen Gardner told me I was going to Oklahoma with Washoe and so I was going to Oklahoma with Washoe.

I wasn't blind to what this meant, however. My responsibility for Washoe was about to grow exponentially. Up until now, I had been just one part-time member of her foster family. But now the Gardners wanted Washoe to leave her foster parents-surely a traumatic event for any five-year-old-and live with one of her siblings. Washoe and I were great playmates and our attachment was obvious, but I was not her mother, and certainly not the beloved matriarchal figure Trixie had been since Washoe's infancy. If the Gardners were ready to shut down the project because, among other things, Washoe would have a hard time adjusting to new graduate students, why were they sending her away to adjust to an entirely new life? The solution seemed worse than the problem, at least in my eyes.

But the Gardners kept their motives to themselves. It never occurred to me to ask why they weren't going to Oklahoma with Washoe. "Washoe," Allen Gardner would always say, "belongs to science." It was hard not to feel that this lofty sentiment was, on some level, a convenient way of evading the responsibilities of foster parenthood. But Washoe had never been a full-fledged Gardner family member; she was part stepchild and part research subject and now she was being shipped off to live with another scientist and part-time family member.

In hindsight, it is obvious that Allen Gardner was a godsend for a revolutionary experiment like Project Washoe. Thanks to his precision, the project's data will stand up forever under the harshest scrutiny. In the hands of a lesser scientist, the outcome might have been disastrous. Allen Gardner prepared me for the rough and tumble of scientific discourse. After training with him I could tackle almost any challenge in the behavioral sciences, and there was no challenge bigger and more controversial than ape language study.

In late September 1970, I packed my bags and prepared to leave with Washoe for Norman, Oklahoma. My family's exit from Reno seemed as unlikely as our entrance. Washoe had gotten me into graduate school, and now she had gotten me my first teaching job. Debbi and I had arrived in Reno three years earlier with one infant, and now we were leaving with three children, one of them a talking chimpanzee.

All of our plans-to take turns going to graduate school, to have children afterward, to work with special kids-seemed like another couple's fantasy now. We decided to stop pretending we were in charge. A definite pattern was emerging: Washoe kept opening doors, and we kept walking through them.