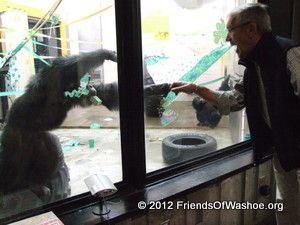 Adapted from Chapter 1 of Next of Kin, by Roger Fouts with Stephen Tukel Mills (pp. 13-15).

On a hot Sunday in August, Debbi, Joshua, and my parents dropped me off in Reno for my interview and wished me luck. As Dr. Gardner and I strolled across the campus, which ironically was where the Ronald Reagan chimpanzee movie, Bedtime for Bonzo, was filmed, he explained the two main parts of the job. First, to help raise Washoe by taking care of her day-to-day feeding, clothing, and play. Second, to expose her to American Sign Language. I was already taking care of one primate infant, my son, so I thought I could handle that, and as for learning sign language, it would be a challenge, but I had no doubt that I could master it given enough time.

The focus of the interview soon shifted to me, and my worst fears were confirmed. Gardner was skeptical about my credentials for his research project. It wasn't my academic preparation that gave him pause-I had taken several courses in animal psychology and statistics-but my desire was to do clinical work with children. To him, this was a fatal flaw in my character. Gardner had no use for someone who was likely to waste time on nebulous concepts that couldn't be proved in a laboratory.

The interview was going badly. In desperation, I tried to win him over by telling him how much I was looking forward to taking courses with two well-known philosophers of science during the coming school year.

"Science doesn't need philosophy," he shot back. "If you are influenced by them it will show that you weren't worth anything to begin with."

Our walk was now over and so was the interview. I had blown it. I felt sick to my stomach knowing that my career in psychology had reached an end. I considered begging him, but I knew it would not do any good. As we said good-bye, Gardner asked if I wanted to walk over to the university nursery school and see Washoe. She played there every Sunday on the jungle gym and swings when there were no children around. I knew this was the loser's consolation prize, but I wasn't too proud to accept it.

As we approached the fenced-in nursery school, I saw two adults playing with a child in the shade of a tree. At least I thought it was a child. When the child saw us coming she leapt up and began hooting. Then she began sprinting in our direction-on all fours. We were only a few yards from the four-foot-high fence now. Washoe continued to speed toward us and, without breaking stride, vaulted over the fence and sprang from the top rail. What happened next amazes me to this day. Washoe did not jump onto Allen Gardner as I had expected. She leapt into my arms. Before I knew what was happening, this baby chimpanzee had wrapped her arms around my neck and both legs, around my waist. She was giving me a giant hug. Somewhat sheepishly, I found myself hugging her back. With my dreams in ruins, I needed that hug more than anything in the world.

Then the small diapered girl turned around in my arms and reached out for Allen Gardner. She climbed into his arms and gave him a hug, too. I was stunned to see Gardner smiling warmly at me over Washoe's shoulder. Washoe liked me, and he knew it.

I don't know why Washoe hugged me that day. In years to come I would discover that she had an uncanny knack for seeking out and comforting those who were sad or hurt, but I never again saw her jump into a stranger's arms. When Allen Gardner called me a few days later to tell me the research assistantship was mine, I knew exactly who had done the selecting. I may not have been Gardner's ideal graduate student, but as far as Washoe was concerned I would make a pretty good playmate. Thanks to a two-year-old chimpanzee I was going to be a psychologist, not a plumber.