Dar was the oldest of the two males at CHCI. His name sign is the index finger of a "D" hand flicking the ear on the same side. Dar was born on August 2, 1976 at Holloman Air Force Base in Alamogordo, New Mexico.

Dar's mother, Kitty, later in life lived at The Cleveland Amory Black Beauty Ranch in Texas. His father, Paleface, was one of the largest chimpanzees in captivity and was at Alamogordo Primate Facility at Holloman Air Force Base. Dar himself was just over five feet tall and weighed approximately 170 lbs. Dar was a mellow guy but showed his strength and size when he displayed. 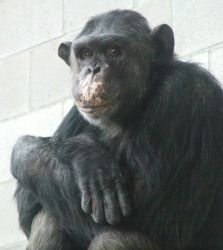 Early Childhood/Rearing Conditions: Dar was cross-fostered by Drs. Beatrix T. and R. Allen Gardner from 1976 - 1981. He joined the Foutses at the Central Washington University in 1981.

Date of Death: Dar passed away November 24, 2012 at CHCI of cardiomyopathy or sudden cardiac failure.

Personal: Dar was a big, easy-going guy. His human companions described Dar as "light hearted," "relaxed," and "good natured." Dar was very close friends with Loulis and the rest of his family.

Favorite Activities: Dar enjoyed playing chase, tickle, and looking at books or magazines. He frequently requested hats and shoes (when they could be found large enough to fit his size 12 or 13 feet). He was interested in tools, mechanical things, and taking things apart.

Tributes to Dar after his passing