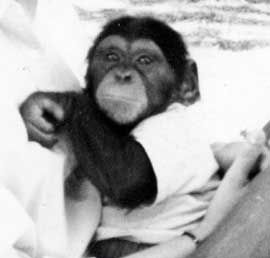 In our first years together, Washoe's origins were a rather romantic mystery to me. I knew she had been "wild collected" in Africa, and I knew that the Gardners had acquired her when she was ten months old from the Holloman Aeromedical Laboratory, in New Mexico, where she was part of the United States space program. Naively, I assumed that Washoe must have been abandoned by her mother, then rescued by some decent person who sent her to America for the best possible care - like Curious George and the man with the yellow hat.

It was as only years later that I learned the truth about how the Air Force had gone about "recruiting" infant chimpanzees from Africa in the 1950s and 1960s. The military procured the chimpanzees from African hunters who stalked mother chimpanzees carrying a baby. Usually the mother was shot out of her hiding place high up in a tree. If she fell on her stomach, then her infant, clinging to her chest, would die along with her. But many mother chimps shielded their infants by falling on their backs.

The screaming infant would then be bound hand and foot to a carrying pole and transported to the coast, a harrowing journey usually lasting several days. If the infants survived this second ordeal, and many did not, then they were sold for four or five dollars to a European animal dealer who kept them in a small box for days until the arrival of American buyer - in this case the Air Force. Those still alive when the buyer came were crated up and sent to the United States, a journey that mirrored the slave trade of earlier centuries. Very few babies emerged from the crates. It is estimated that ten chimpanzees died for every one that made it to this country.

By the mid-1960s the United States was no longer launching chimpanzees into space but was conducting medical experiments on them instead. One chimpanzee infant that survived the journey to America in the spring of 1966 was a ten-pound infant named Kathy. She was shipped to the Holloman Aeromedical Laboratory, but before she could become a subject of disease research, fate intervened.

As the largest and healthiest infant at Holloman, Kathy greatly appealed to two scientists who were visiting the Air Force laboratory on a recruiting mission of their own. Drs. Allen and Beatrix Gardner chose ten-month-old Kathy to learn American Sign Language. But the Gardners thought that a chimpanzee, even one raised by humans, should not have such a human name. So when they brought Kathy home they renamed her after the county in Nevada where she would grow up: Washoe.